An investigation into the embodiment of loss, uncertainty and that which we cannot name. 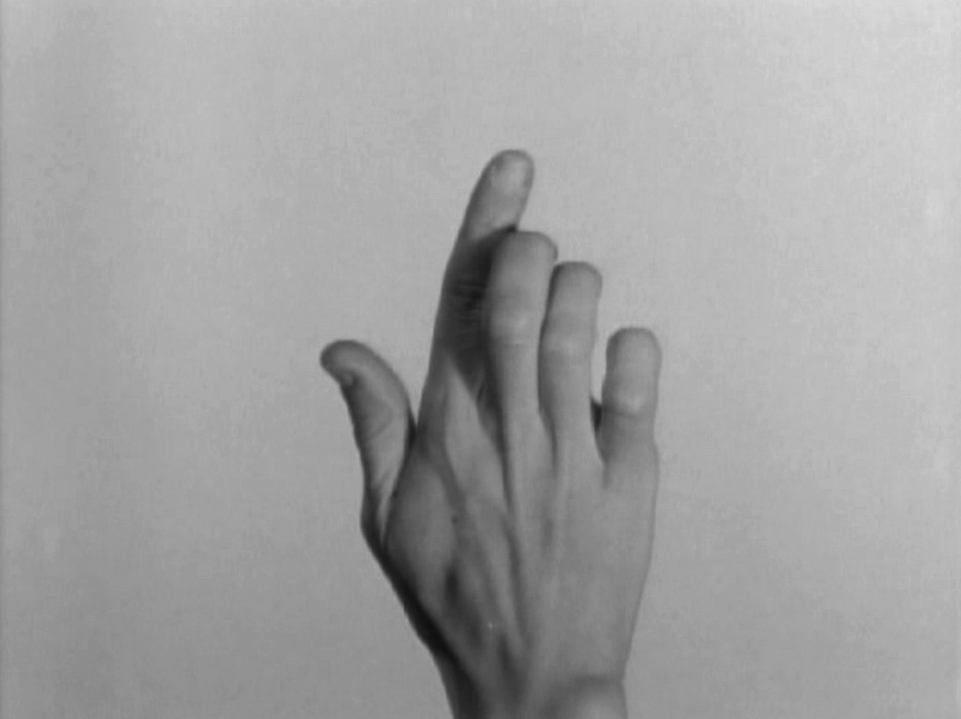 Rainer’s first film, Hand Movie, was shot by fellow dancer William Davis when Rainer was confined to a hospital bed, recovering from major surgery and unable to dance. The resulting five minutes of footage is a sustained close-up shot of Rainer’s hand against a grey background as it stretches and contracts, bends and points, performing the kinds of everyday, quotidian movements that characterize her pioneering minimalist choreography.

Courtesy of Video Data Bank at the School of the Art Institute of Chicago, vdb.org 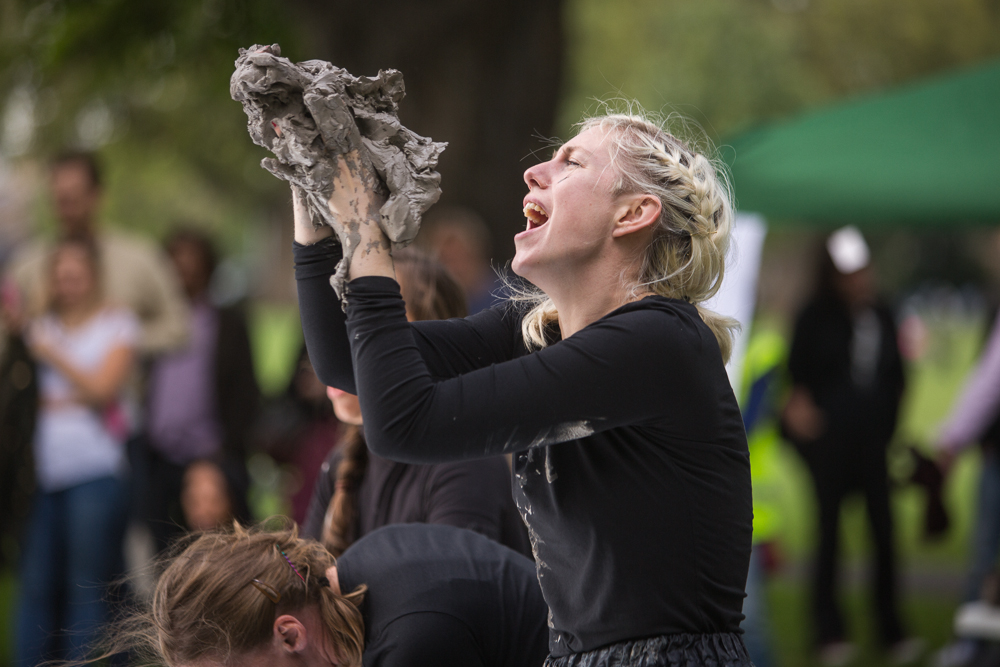 The Keeners 2015 takes its title from the notion of ‘keening’, where professional mourners in Irish and Celtic traditions grieve the losses of others on their behalf. Peake pays homage to this tradition and presents a collective grief in the form of a public performance to mourn the commodification and instrumentalisation of art by the corporate world, enacted by a chorus of dancers. Collected through a public open call, the dancers mourn every one of the submitted personal losses. The performance was situated in London Fields, which is classified as common land (Lammas Rights for grazing animals), and links to its history as a plague burial site.

Light bondage. Joan Armatrading’s song I Like it When You Call Me Names. Shame,

Understanding self through freedom and sacrifice. Being covered, held barely.

Will it crack my teeth and do I care? Those edges. Pleasure, desire, chaos.

What happens when language blurrsss. It is all you have and it was never yours. How to

about liberation? The nets. recurring tensile material. Containment. A stocking,

A thrill, ominous, putrid, sexy in an idea that something could shift motive in a split

Courtesy of the artist and Arcadia Missa, London 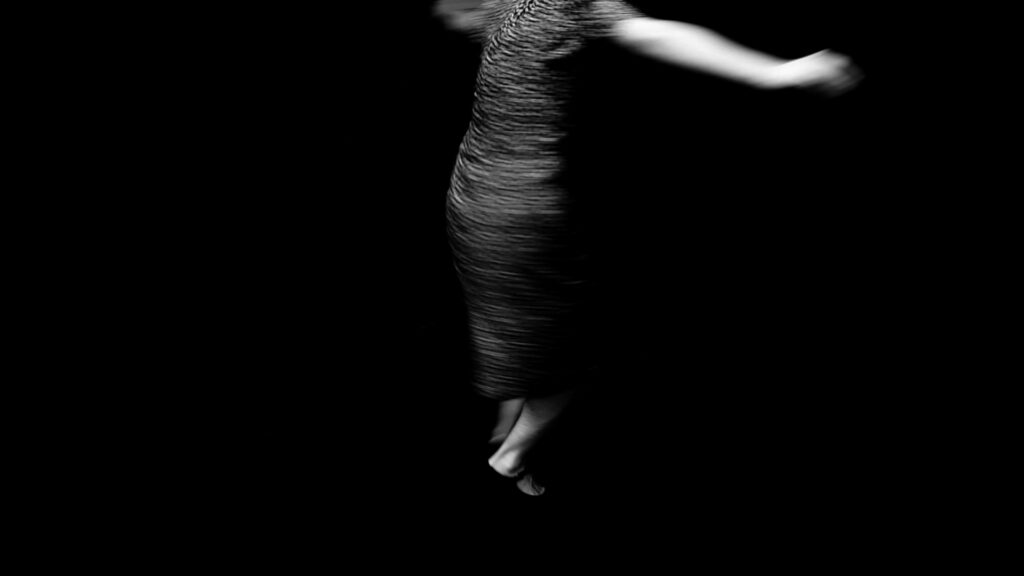 A dance dedicated to artist, drag king and gender activist Diane Torr who passed away in May 2017. The traditional urban zeybekiko dance of Rebetiko, traditionally only performed by men, is danced by my hybrid manifestation: a single shot fusing male and female as ode to life and death. 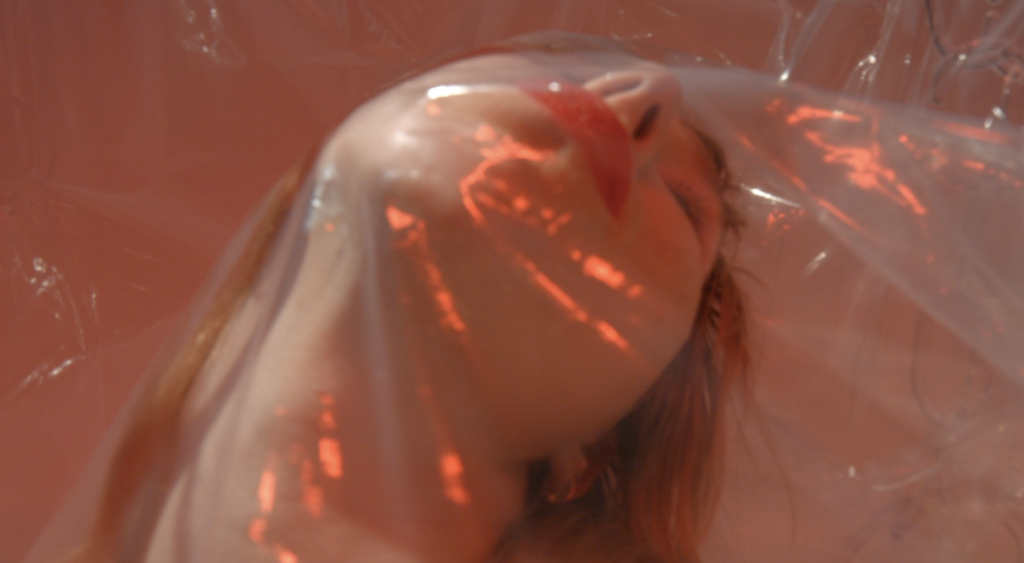 When Hong Kong was returned by the British to China in 1997, the curator Oscar Ho created an exhibition based around the ancient myth of the Lo Ting, a half-human, half-fish creature thought to be the ancestor of the indigenous inhabitants of Hong Kong. In her video Zoë Marden reimagines this story to foreground the uncertainties of our lineage and to challenge notions of belonging. Filming underwater she dissolves the boundaries between what we are and what we are not.

Little Lo Ting is part of a long term research project that has included sculpture, performance and a series of texts. 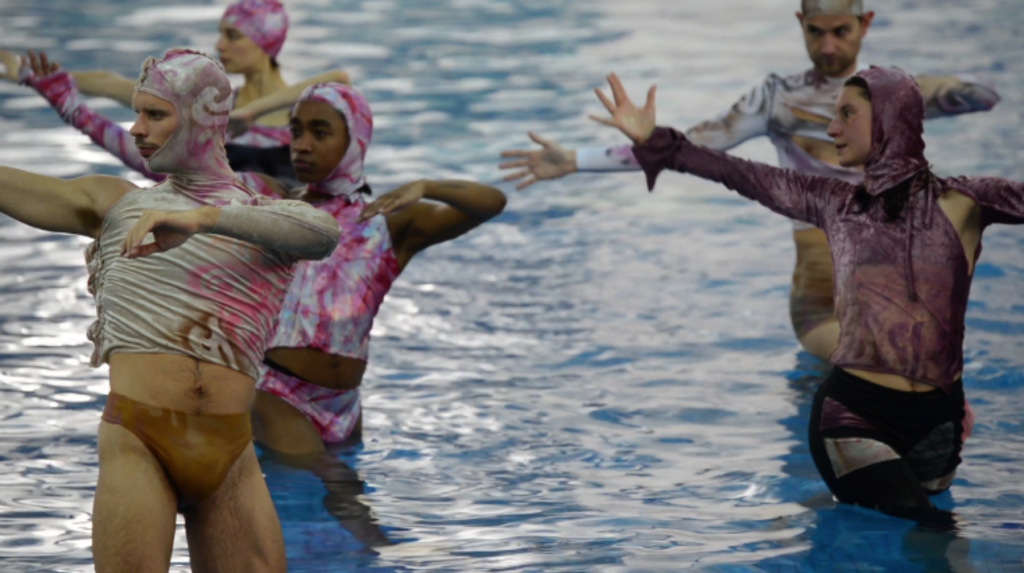 water bb depicts a group of people standing in the atrium leisure pool of Wavelengths Leisure Centre in Deptford London. Despite the association with synchronised swimming, the participants appear to be following a workshop or training routine. The work foregrounds ways through which collective movement can be utilised to create new forms of world building. A collaboration between designer HRH and artist Gray Wielebinski, with choreography by Holly Blakey.

The video was originally presented for the arts festival Deptford X where it was shown in a dance studio overlooking the pool along with costumes and props from the performance.

Courtesy of the artists 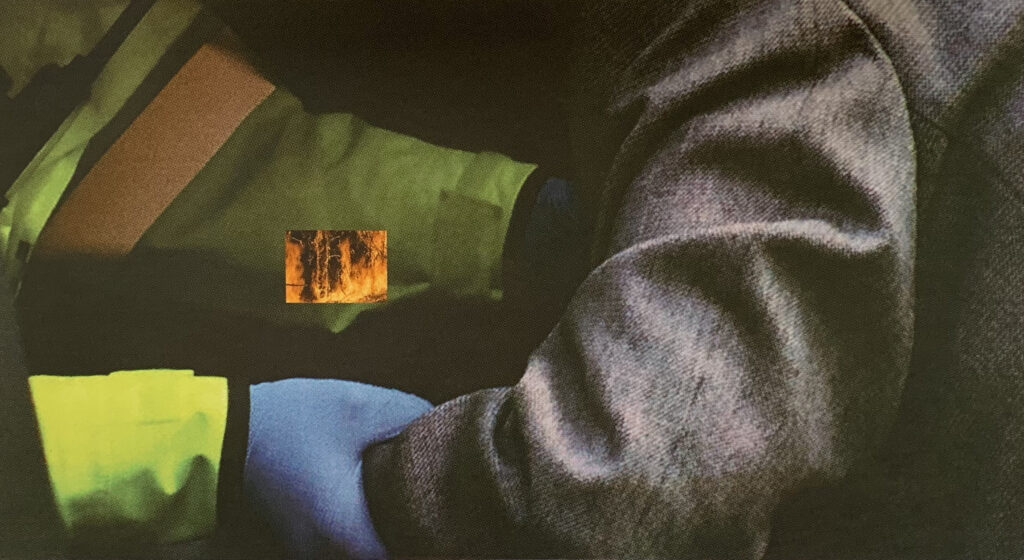 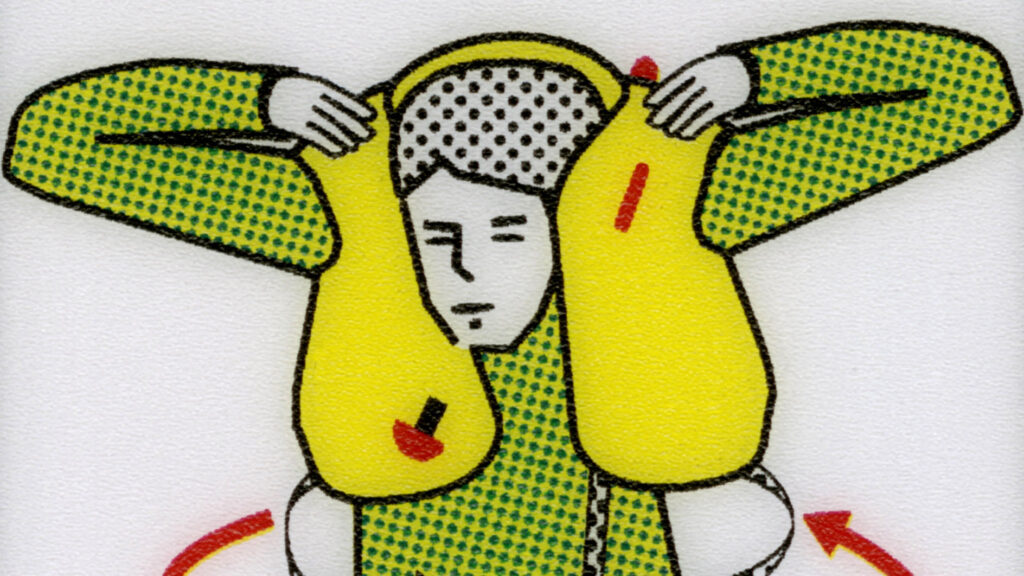 Airline safety instructions can be ambiguous.

Lisa Clifford – Co-director/Camera of Dad’s Coffin. The film is Lisa’s second feature documentary film. Her debut, Militia Man about a Congolese warlord and his trial at the International Criminal Court, is currently screening in the US and Europe. Lisa is a journalist with more than 25 years’ experience reporting from around the world and an alumni of ESoDoc documentary development programme.

Phoebe Collings-James (b.1987, London, UK) Lives and works in London

Collings-James’ work often eludes linear retellings of stories. Instead, her works function as what she calls ‘emotional detritus’: they speak of knowledges of feelings, the debris of violence, language and desire which are inherent to living and surviving within hostile environments.

HRH is a costume and fashion designer and creative director and often works on artist collaborations in video and performance. HRH has a long working relationship with Holly Blakey on projects such as Some Greater Class at the Southbank Centre (2017) and But We’re Doing This at London Contemporary Dance School The Place (2019) and has previously collaborated with Gray Wielebinski on their video and performance piece A Dog Pees On Things For More Than One Reason in 2018.

Fenia Kotsopoulou (b. 1981, Pyrgos, Greece) Lives and works in Lincoln

Fenia is an award-winning Greek cross-disciplinary artist based in Lincoln (UK), investigating the fields of performance (art), dance, video, photography, and their intersection. She collaborates with digital artist, Daz Disley, is artist-in-residence at x-church in Gainsborough (UK) since 2016, and teaches on the Master of Theatre Practices in the University of ArtEZ (Arnhem, NL).

Zoë Marden is an artist, curator and writer, who works with performance, video, text, sound, sculpture and installation to create alternate worlds and speculative futures. Her works are research-focused and concerned with intersectional feminism, specifically where it overlaps with the postcolonial. Her intimate performances play with the voice, activating soundscapes of desire and vulnerability, while recent projects have investigated the mythologies of witches and mermaids and their resonance within contemporary culture. Recent performances and exhibitions include: Remember the Liquid Ground, Gasworks and The Royal College of Art (2020); AMY/YMA, Serpentine Gallery, London (2019); Unbothered + Moisturised, Eaton Workshop, Hong Kong (2019); Manifesta 11, Cabaret Voltaire, Zurich (2016). She is part of the CAMPerVAN collective, a nomadic queer performance platform that has been active since 2016

Florence Peake (b.1973, London, UK) Lives and works in London

Yvonne Rainer is a choreographer, filmmaker and writer. In the 1960s she was a leading figure of the Judson Dance Theater,  a loose collection of dancers and artists whose performances (often held at the Judson Memorial Church in New York City) crossed fluidly between the fields of dance and visual art, creating a striking and intellectualized form of performance that denied the theatricality and emotionalism of modern dance in favor of movements that seemed casual, spare, and cool. Over time, Rainer’s works became increasingly personal and political, and by the early 1970s she had begun to focus on producing experimental feature films. Over the next 25 years, Rainer produced an extraordinary series of films that engaged with the most advanced theoretical thinking of the time while also grappling with issues of power, privilege, and inequality. In 2000, Rainer returned to choreography and continues to produce provocative new works.

John Smith’s films and videos, known for their formal ingenuity, anarchic wit and oblique narratives, create mysterious and sometimes fantastical scenarios from the raw material of everyday life. Over five decades he has developed an extensive and varied body of work that defies easy classification, blurring the perceived boundaries between documentary and fiction, representation and abstraction.

Gray Wielebinski (b.1991, USA) Lives and works in London

Gray Wielebinski is an American artist based in London whose work across sculpture, print, installation, drawing, performance and film tends towards the exposure and creation of mythologies of power and identity in terms of gender, race and sexuality. With a particular fascination in the cultures of sport and the latent polarities of competition and belonging; machismo and eroticism; national identity and hierarchy; performance and surveillance.

Cheryl White – Co-director/Writer of Dad’s Coffin. Cheryl completed her MA in Scriptwriting at City University in 2007 and has written and directed a number of award winning films which have screened at festivals around the world. She was awarded an Arts Council grant for her play inspired by Poly Styrene and is currently working on a series of audio plays inspired by the Clash’s London Calling album.