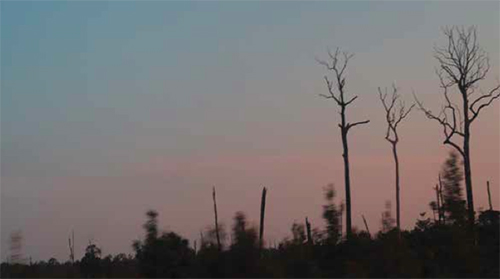 From the Elsewhere by Riz Maslen

“I breathed a sigh of relief/That shook the mountain down”

Riz Maslen has had an extraordinary career so far –
playing live at Coachella and the Montreaux Jazz Festival, composing for Kew Gardens and the English National Opera, and releasing work on a who’s who of independent labels including R&S/Apollo, Oxygen Music Works and Ninja Tune. But scratch beyond those beginnings and an extraordinary trajectory emerges – of an artist building an aesthetic that breathes both electronically and organically, in which can be heard jazz, folk, psychedelia and post-rock, alongside those electronics, samples and field recordings which characterise her early output.

From the Elsewhere will be a new sonic work from Riz Maslen, drawing on the other and the elsewhere. A place of unknowing, is there somewhere in-between our realities and dreams and if so, what would it be like? The layers of sound will reveal themselves and become immersive allowing the listener to conjure up their own image of The Elsewhere.