An exploration of the construction of boundaries and space, and how bodies move within and across them. 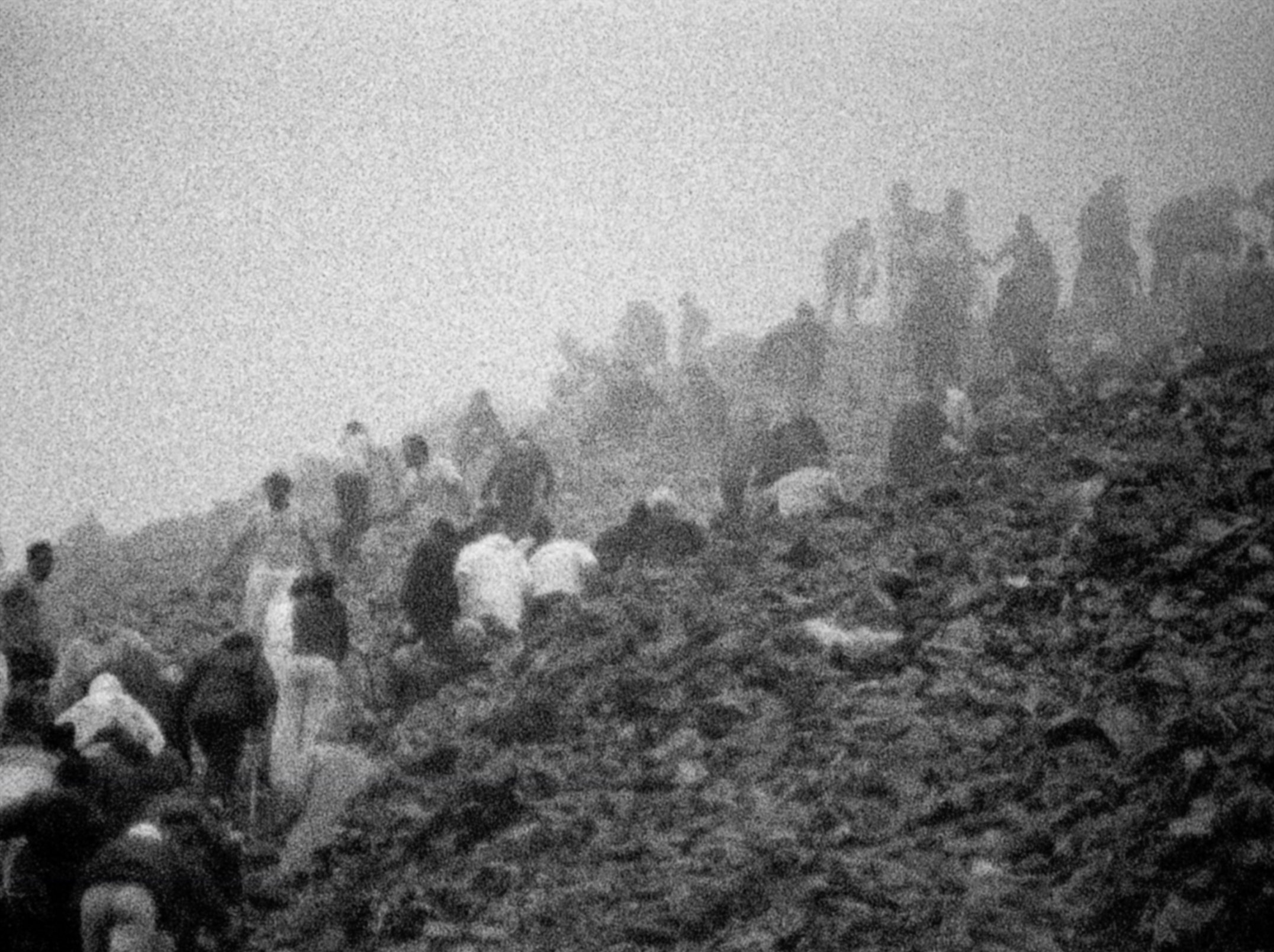 A film in which thousands of people climb a rocky mountain terrain. The destination and purpose of their ascension remains unclear. A vague, mysterious and unsettling pilgrimage fraught with unknown intentions. The title ‘The Coming Race’ is after a Victorian novel by E.G.E. Bulwer-Lytton, published 1870, concerning a subterranean super-race who live under a mountain – which at the time was considered by some to be a work of fact. 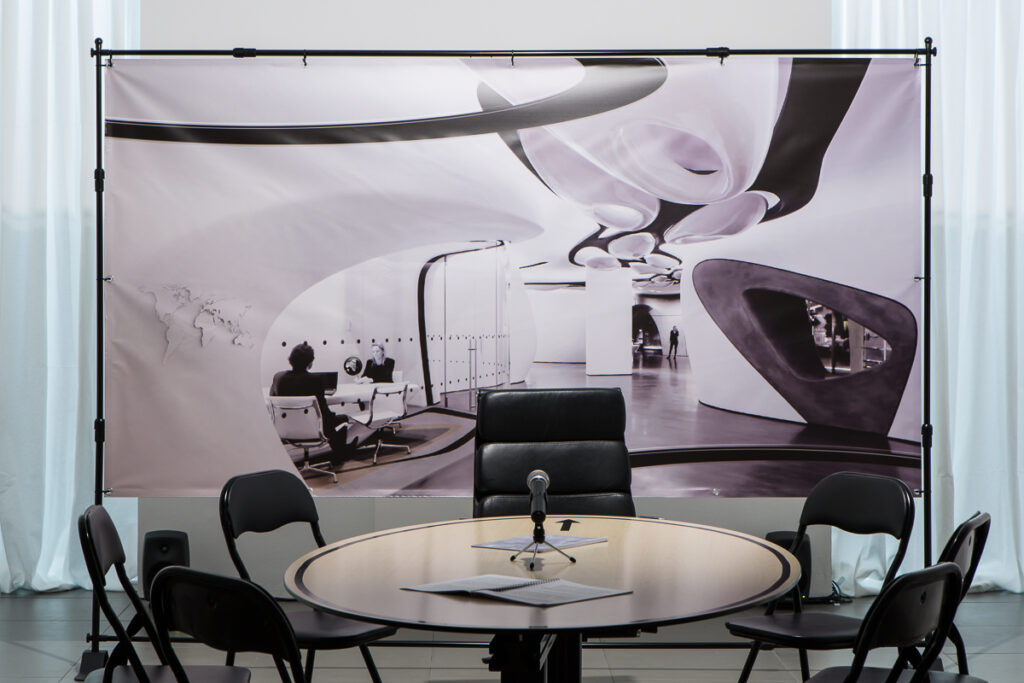 In a split screen video, a slowly-moving portrait of Sheryl Sandberg is paired with a scene featuring a group of women in a boardroom. Based upon Harriet Middleton Baker’s live performance of the same name, the women enact the gestures of office politics and political debate through a choreography of hand gestures and carefully placed nods. Interested in the interconnections between feminism, architecture, business and politics, Middleton Baker invites you to ignore Sandberg’s direction to ‘lean in’ and instead to stand back and consider the mechanisms of power. 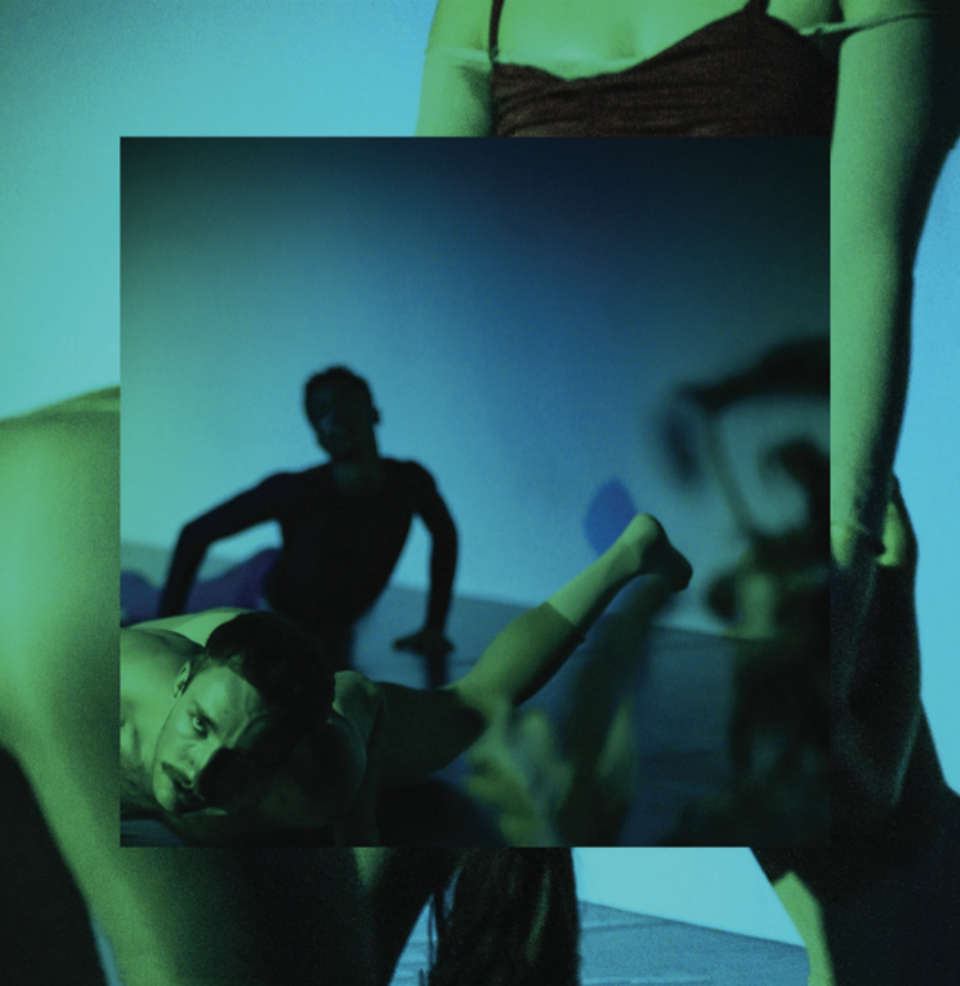 Set within a green lit gallery interior, Holly Blakey draws upon the conventions of dance in music videos and club environments to form an intimate reflection on the use of bodies in contemporary culture and interpersonal relationships. Created in 2015, a time when dance was gaining greater visibility in the art world, Blakey’s work explored what happens when the harsh interior of the gallery space hosts a ‘live pop video’ and the value or class associated with different dance forms. Through the repetition of moves typically designed to titillate an audience, Some Greater Class placed emphasis on the vulnerability of bodies and a need for greater connection. 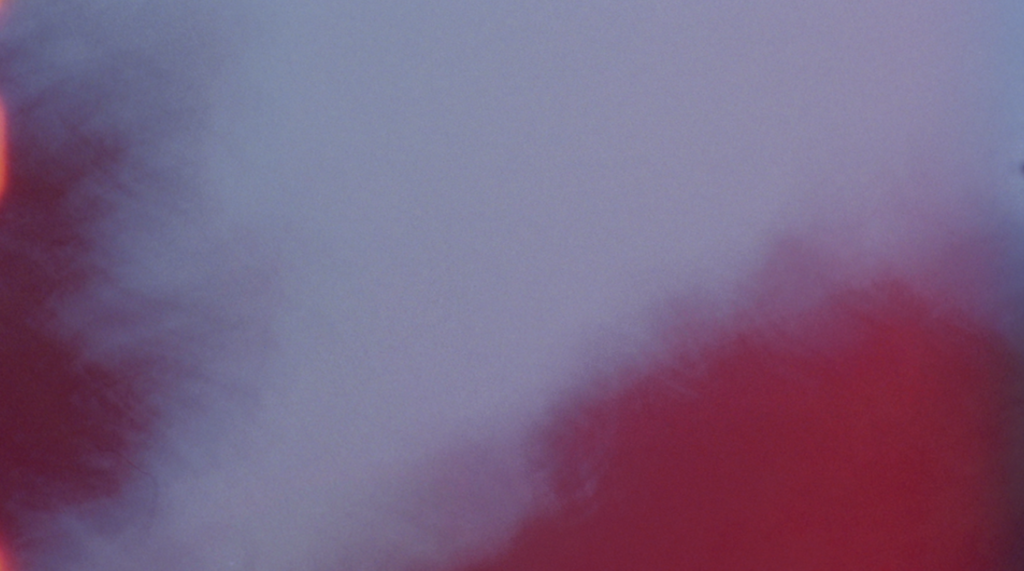 gendersick combines visual material gathered on the streets of Dallas and Fort Worth Texas with a monologue delivered by an unnamed narrator. Hours of interviews are distilled into 12 minutes of speech. The narrator’s eloquently-voiced experiences are visually activated by moving images edited together from one second long, double-exposure, in-camera stop frame animations. gendersick poses important questions around what it means to be in-bodied, and the expectations that come with essentialised notions of gender identity.

gendersick was commissioned by Fort Worth Contemporary Arts and the Gender and Women’s Studies Program at Texas Christian University. 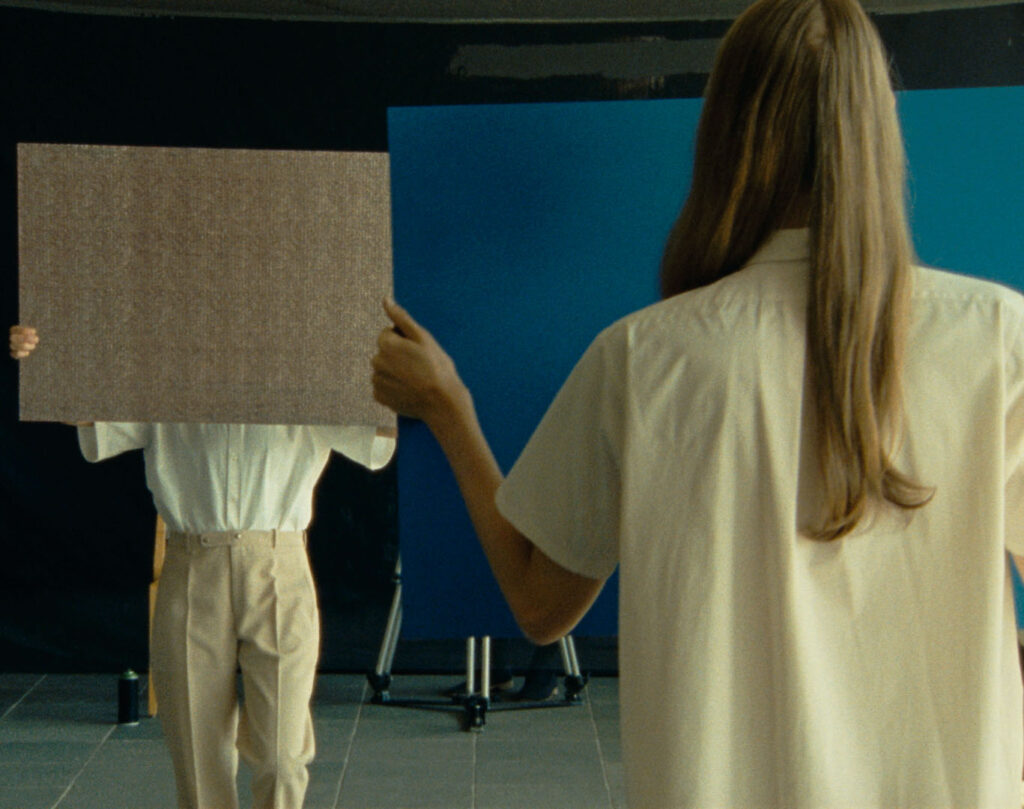 In Cinesexual Ursula Mayer restages the experimental filmmaker Michael Snow’s Two Sides to Every Story (1974) with model Valentijn de Hingh and musician JD Samson who are shown from two simultaneous viewpoints between two cameras. The title relates to a term developed by film theorist Patricia MacCormack to describe an erotic attraction to the space of film, which collapses classical divisions between subject and object. Cinesexual is usually shown as an installation with each reel projected on either side of a screen, forcing the viewer to move around the space in order to see both films. For this programme, Mayer permits us to experience both views simultaneously to create a new experience of the work that emphasises the precise choreography of the composition and the relationship of space to gender, of the screen to desire. 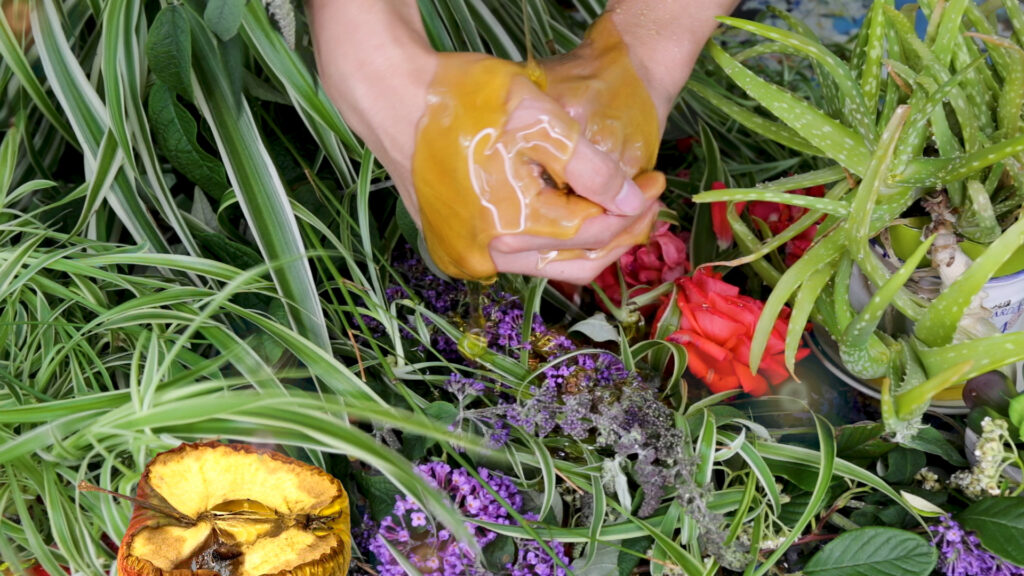 In Skin Flick Adham Faramawy continues their exploration of how identity is formed and re-presented through an approach to media that draws together painting, sculpture, performance and moving image. Beginning with a personal narrative around the use of supplements and hormones, scenes showing the sensual manipulation of liquid and foam eventually give way to the myth of Daphne and Apollo. Informed by performances for camera associated with vlog confessionals, makeup tutorials, and advertising imagery, Faramawy finds a way to express the fine line between screen and flesh, medicine and disease, and how they affect our concept of bodies and the natural.

Supported by Near Now 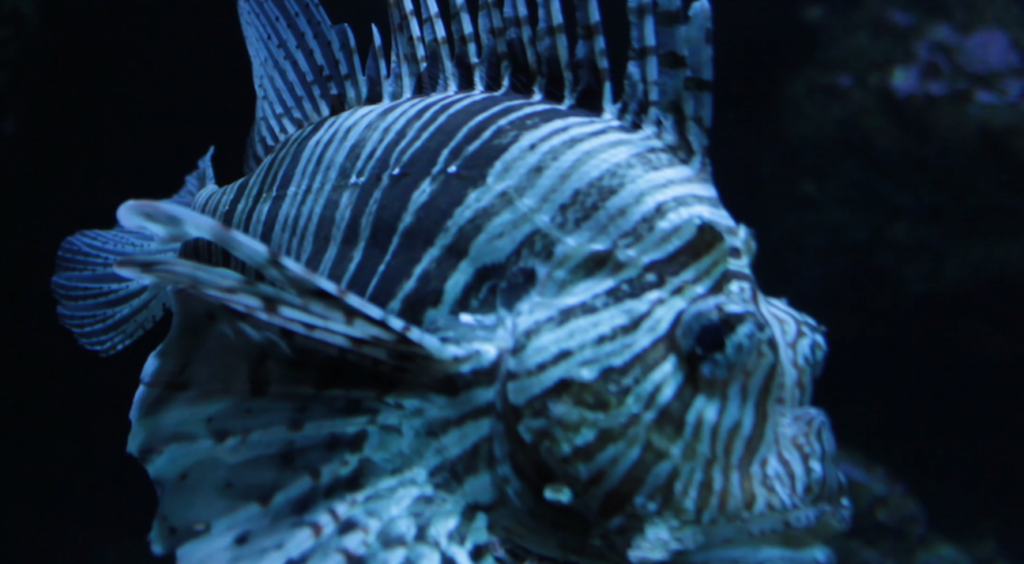 In this silent video created after a 3-month residency on the artificial island of Vassivière in France and shot between Vassivière and La Réunion Island, Paul Maheke uses the beauty of the landscape, sealife, and his own dancing, as a way to look ‘at the symbolic figure of the island and the body as typical spaces to be colonised as well as possible sites of resistance’.  Accompanied by subtitles that explore the relation of the exotic to the colonial, Tropicalité, l’île et l’exote is a poetic exploration of what it means to be present in a space and the borders created between self and other.

Produced with the support of CIAP-Île de Vassivière. Courtesy of the artist

Ben Rivers is an award-winning artist and filmmaker represented by Kate MacGarry Gallery in London. He won the FIPRESCI International Critics Prize, 68th Venice Film Festival for his first feature film Two Years at Sea; the inaugural Robert Gardner Film Award, 2013; Baloise Art Prize, Art Basel 42, for Sack Barrow; Paul Hamlyn Foundation Award for Artists, 2010. Ben Rivers often employs analogue media and hand develops 16mm film, which shows the evidence of the elements it has been exposed to – the materiality of the medium forming part of the narrative. His work ranges in themes, including exploring unknown wilderness territories to candid and intimate portraits of real-life subjects.

Harriet Middleton Baker is an artist interested in the representations of power in structural narratives. She works on long-term research projects that operate as umbrellas to growing series of performances, choreographic works, films, and writing projects.

Holly Blakey’s dance work spans stage and screen. Her award-winning debut live show Some Greater Class was performed at the Southbank in summer 2017. Blakey’s work for camera, as a Director and Choreographer, has featured collaborations with music artists and fashion houses such as Dior, Gucci, Claire Barrow, Young Fathers, Gwilym Gold, and Mica Levi and Florence and the Machine. After the world premier of Cowpuncher in 2018, a commission to reopen Southbank Centre’s Queen Elizabeth Hall, Blakey opened Cowpuncher My Ass earlier this year, a sequel as before costumed by Vivienne Westwood and scored by Mica Levi.

Jordan Baseman (b.1960, Philadelphia, USA) Lives and works in London

Jordan Baseman is a visual artist and filmmaker. He received a BFA from Tyler School of Art, Philadelphia, Pennsylvania and an MA from Goldsmith’s College, University of London. Baseman is currently the Reader in Time Based Media, Senior Tutor and Pathway Leader in Moving Image at the Royal College of Art, London. Baseman has a long history of creating projects in collaboration with UK-based and international, not-for-profit and public institutions.  The artworks are installations, audio works, and single-screen films. Jordan Baseman’s films are frequently featured in international exhibitions and film festivals. Jordan Baseman is represented by Matt’s Gallery London.

Ursula Mayer (b.1970, Austria) Lives and works in London and Vienna

Ursula Mayer’s single and multi-channel films are crystalline circuits of images, composed of signs borrowed from architecture, literature, politics, mythology, geology and science. Through her poetic treatment of film Mayer interweaves myth, biopolitics and the semiotics of cinema to visualize and ruminate upon future post human ontology. In 2014 she was awarded the Film London Jarman Award for experimental film and the Otto Mauer Prize in 2007. She graduated in 1996 at the Academy of Fine Arts, Vienna and completed her MFA at Goldsmiths University London in 2005.

Adham Faramawy is an artist based in London. Their work spans media including moving image, sculptural installation and print, often engaging technology to discuss issues of materiality, touch, toxic embodiment and identity construction.

Paul Maheke (b.1985, Brive-la-Gaillarde, France) Lives and works in London

After studying at ENSAP-Cergy, Paris and Open School East, London, Paul Maheke’s works and performances have been shown at Tate Modern, London (2017), the 57th Biennale de Venice (Diaspora Pavilion, 2017), Centre Pompidou, Paris (2018), Lafayette Anticipations, Paris (2018), Baltic Triennial, Tallinn (2018), Manifesta, Palermo (2018). In 2018 the Chisenhale Gallery, London hosted a solo exhibition, which travelled to Vleeshal CCA, Middelburg in January 2019. In 2019 his performances were shown at the 58th Venice Biennale and at ICA Miami as well as in a solo exhibition at Triangle France, Marseille.